I've realized that this page has grown as I've added more of my friends. in case you're wondering, the official quartet is John B., Elliott, Chad, and myself. We lived and argued together for a few years.

After my freshman year I moved into a house with John B. and Elliott, two guys that had lived on the same floor as me. We had hoped to get another guy named Chad to move in also, but couldn't get in touch with him. In a strange twist of fate, he turned out to be the person to deliver one of our first pizzas...

I thought I'd include this page as a nod toward my bud's who have recently graduated and moved into the "real world", and to the others who, like me, are hiding out a little longer in grad school. Well actually they were severely pissed that I didn't mention them in my homepage. I'm leaving out some people, partly because I'm not sure they want to be plastered over the internet, and partly because I'm trying to forget some of them. 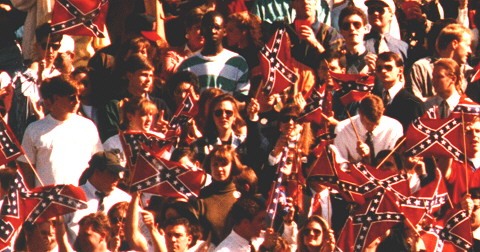 No, the above picture is not a Klan rally. In some strange adherance to "tradition", many Ole Miss fans wave the rebel flag at football games. Of course, the University does not condone this, and you can see the officially sanctioned flag in the lower left hand corner. (I guess they hoped that a similar style would be easier to push on the students.) The other noticable thing is the ties, which is a holdover from the days when students were required to wear uniforms.

This photo actually comes from a shot of the entire student section at one of the 1994 football games. It just so happened that this was the only game where we all sat (stood?) together. And so, on to the roll call:

The guy on the left who is obviously not wearing a tie is Chad. He was the only non-engineer in the house, so he spent a lot of time partying while we were studying. We told him that it was OK since in a few months we would actually have jobs, and he would still have an English degree. To his left is Margaret, his on-again off-again girlfriend. I guess after all the things they have been through they're fated to be together.

Just behind her is Elliott, who kicks butt in Electrical Engineering and has a mean running hook shot. It was pretty cool of him to let us live in the house for dirt cheap, and we were nice enough not to mooch too much food off of him. Next to him is yours truly, big hair and glasses all over the place.

The guy right behind me is Chal's brother Dan, who just happened to be able to make this game (he doesn't go to Ole Miss). Chal (pronounced Cal) himself is to Dan's left, right behind the flag. He is a poly-sci major who will one day rule the earth with an unyielding fist of iron. He likes dramatic expressions like that, maybe as a result of his love of comic book superheroes, cartoons, romance, and berets.

Next to Chal is John B., who happens to be from Morgan Freeman's home town. He has a "IV" at the end of his name, which is why no one calls him John or Johnny. For some reason, his ex-girlfriend Holly (now turned psycho from what I've heard) is two rows in front of Dan. John B. is the only one of us who can do a handstand pushup. When you live with someone for three years you learn things you don't particularly want to know.

Behind John B. is Dan, and to his left are Jerry and Woody. They lived on Chal's floor, and we saw them every once in a while. I bumped into them at the coffee shop pretty often, so I probably knew them better than the other three guys did.

Well, after getting the whatfor from her, I thought I'd put a little something in here about Lynn. She is basically one of those people who would walk through a fire to save a kitten. Her heart of gold probably got dented a couple of times from all the trouble we caused her. Currently she's off in Maryland earning gobs of money (like a lot of the people I know). At least I don't have to be up at six in the morning...

Vince, the daring Spaniard also wanted his name published in my cheesy HTML, so here it is. He's a grad student in EE who moved in when I moved out. He loves fine liquour and tobacco, and often confuses my friends with his accent when they call Oxford by mistake.

Back to my personal stuff.